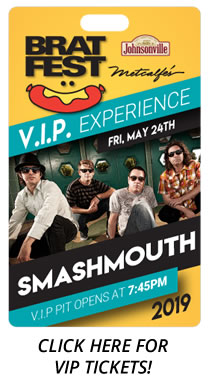 Welcome to the happy shining, phoenix rising, reuniting world of Classic Smash Mouth in 2018. For the first time in nearly a decade, all five members of what is widely considered the “Classic” Smash Mouth lineup have committed themselves to the long term future. Founding guitarist and main SM songwriter Greg Camp (Camp is to Smash Mouth what Pete Townshend is to The Who), along with world-renowned drummer Michael Urbano (a band member for three of the group’s four essential Interscope albums), has returned to the fold for an unforeseeable horizon of Smash Mouth projects already in the works. Founding bassist Paul DeLisle and 20-year-veteran SM keyboardist Michael “Hippy” Klooster round out the classic combo.

A look back at Smash Mouth’s formative years show us a band determined to make an impact from the get-go. Formed in late 1994, the band immediately begins recording demos and showcasing in both San Jose and Hollywood, CA. In June of 1997, Smash Mouth is signed to Interscope Records when label brass catch wind of an unknown (and unsigned) band being ADDED to highly influential L.A. radio station KROQ’s playlist after only one spin of their song “Walkin’ On The Sun”.

Smash Mouth’s major-label debut “Fush Yu Mang” goes more than DOUBLE PLATINUM and sets the table for what most consider their masterpiece, 1999’s brilliant follow-up album “Astrolounge”. No sophomore slump for these guys! Boasting three top-ten hits (“All-Star”, “Then The Morning Comes”, and “Can’t Get Enough Of You Baby”), sales for “Astrolounge” are nearly double those for their debut, approaching QUADRUPLE PLATINUM status.

Smash Mouth’s third, eponymous Interscope release features the ecstatic first single “Pacific Coast Party” and the smash hit “I’m A Believer”. Around this time, Smash Mouth crosses over into film world by providing the musical heart of the soundtrack for “Shrek”, and even making a cameo appearance in the movie “Rat Race”.

Recently, Smash Mouth is very excited to be collaborating with Darryl McDaniels (A.K.A.“DMC” of pioneering rap legends Run-DMC) on a couple of original songs for his upcoming album. And in late 2017, Greg Camp developed a mutual admiration acquaintance with Will Toledo of the band Car Seat Headrest. This lead to Smash Mouth recording a cover of the CSH song “Something Soon”, and Toledo returning the homage with his own version SM’s “Fallen Horses”. These two recordings have been released as a split-single. In May, Smash Mouth will be releasing their long-awaited, all-acoustic version of debut album “Fush Yu Mang” in its entirety. They also begin work this summer on a brand-new album of original material set for a 2019 release.